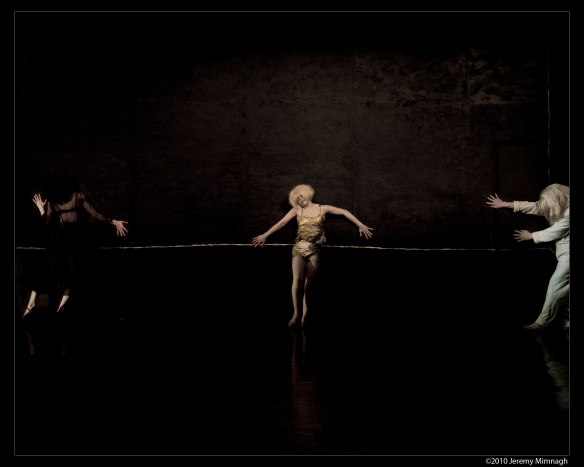 Award-winning Toronto choreographer Susanna Hood dreams the canvases of Francis Bacon to life. Shudder is a tour-de-force show that channels the sublime intensity of Bacon’s paintings through the fractured narrative of a family – portrayed by Hood, Danny Wild and Alanna Kraaijeveld – that is fraught with violence and shimmering sexual energy.  Three figures – witnessed and witnessing – are bound, blurred and melded together to reveal a family portrait, its pigments violently peeled away and reapplied.  Theirs is a grotesquely beautiful and disarmingly intimate encounter as the trio teeters heart-wrenchingly between love and desperation.

Shudder was nominated for a Dora for both Nilan Perera’s sound design and Dan Wild’s performance.

“Shudder is a beautiful and unusual surprise that is both playful and challenging, both intense and subtle, both overflowing and to the point. It resembles nothing else. Hood’s name is definitely one to watch.”  –Catherine Lalonde, Le Devoir, Montreal

“Hood rivets the eye, and her performances are like a primal scream.” 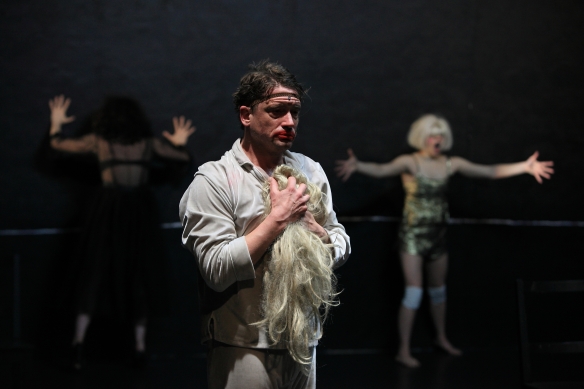 Some words from Susanna:

When I saw Francis Bacon’s work in person at the Albright Knox Museum in Buffalo in August 2007, it was less of an introduction and more of a wake-up call.  It was the end of my first (much-needed) sabbatical during which I’d kept a distance from all art-making and art-viewing.  In this fallow state, such a confrontation with Bacon’s work prompted a radical artistic re-immersion.  My guts twisted in response to the violence rendered on the flesh as though the images had reached under my skin.  This was the call to somehow translate this visceral experience into the piece that you will see.

The research for Shudder has been too varied for me to sufficiently acknowledge my sources here. However, I am particularly indebted to David Sylvester’s interviews with Bacon, which informed many of my own creative choices. My biggest challenges stemmed from my desire to maintain the tension between narrative and abstraction so that physicality (in sound and movement), story, and psychology are interdependent without any aspect losing integrity.  Bacon was explicitly uninterested in narrative in his own work and had little respect for abstract painting; he may likewise disapprove of how the myth-like energies of a transgressive family emerge as the story of Shudder.  But this is not my homage to Bacon.  As much as his work may have been my provocation, this piece comes from me – my vision and my emotional trajectory – in a way that is doubly amplified through the extraordinary work of my collaborators.  It is this that I am proud to share with you.

Bacon sought to inscribe violence on the bodies he represented on canvas.  It is tempting, when viewing his triptychs, for instance, to elaborate such violence into story, into characterization.  Indeed, this process rings true in terms of Bacon’s original influence on Shudder.  However, a more careful examination of Bacon’s work shows – as his own artist statements confirm ­– how he wanted to deflect such elaboration in favour of the immediate and visceral experience of the body.  As I return to the piece a year after its première, I am compelled to invest Shudder with this same brand of immediacy, one that focuses attention on the bodies of my outstanding collaborators as they so eloquently interpret this phenomenon.  Bodies tell stories – this is the lesson that Bacon has helped to show me, and one that I invite Shudder’s audience to experience.

Shudder plays at the Lower Ossington Theatre, 100A Ossington, from August 6-14th.